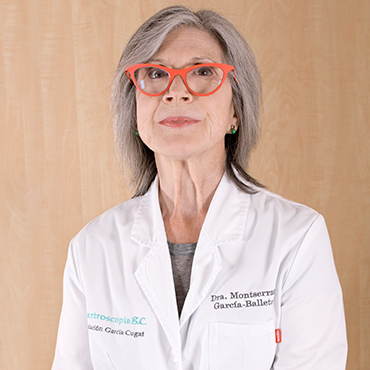 Between 1978 and 1981 she worked in the Chair of Histology and Pathological Anatomy of the Hospital Clinic and Faculty of Medicine of the University of Barcelona. Subsequently and until 1984 with a scholarship from the Ministry of Education she developed a research work on the cell population of non-Hodgkin’s lymphomas performing immunoperoxidane staining techniques. With internships in the Pathological Anatomy Service of The Massachusetts General Hospital.

In 1999 she obtained a Master’s degree in Sports Traumatology from the University of Barcelona and currently works in the Orthopedic Surgery and Traumatology Service of the Cugat Institute recognized as ISAKOS-Approved Teaching Center.

She is a founding member and president of the García Cugat Foundation for biomedical research that aims to promote research in the area of health and well-being of citizens by developing new biological therapies for diseases associated with aging, focusing mainly on the musculoskeletal system.