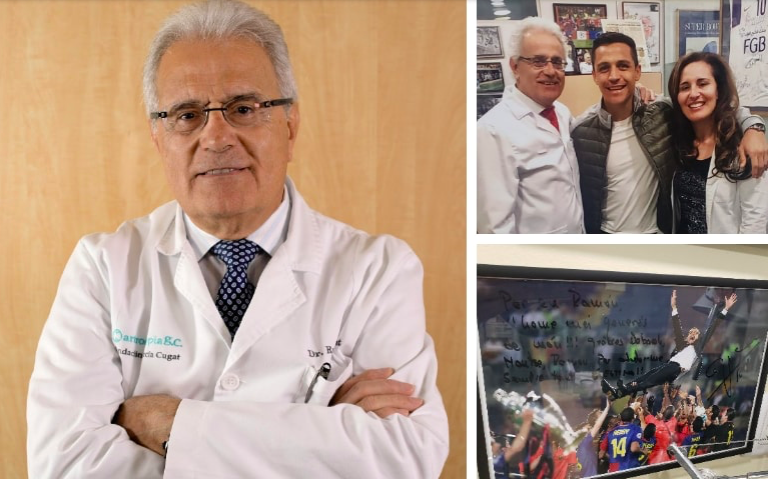 From Pep Guardiola and Xavi, to Sergio Aguero and Vincent Kompany, Cugat has operated on the best from his base in Barcelona.

One picture stands out in Dr Ramon Cugat’s office on walls crammed with signed memorabilia from his patients. It is inscribed by Pep Guardiola over the image of him being thrown in the air by his players at Stadio Olimpico, Rome, after winning the 2009 Champions League.

“The most generous man in the world. Thank you to your family for always helping me so much. I love you,” read the note to the Messi of medicine, the knee surgeon that footballers travel to Barcelona to see.

There is also a note from the King of Spain, Felipe VI, and among football royalty there is Xavi, Andres Iniesta, Sergio Aguero and Vincent Kompany. Aguero went back to Quirónsalud last week for more knee surgery. Cugat’s methods give him a chance of being fit for Manchester City’s potential games in the Champions League in August.

It is no wonder that Guardiola’s players head to Hospital Quirónsalud for treatment with Cugat, given the Manchester City manager was his first patient for his “growth factors” technique of making injuries heal quicker than other doctors.

Their close relationship almost never happened. Cugat’s wife saw Guardiola’s press conference ruling him out of the 1998 World Cup and urged her husband to make contact. After helping to solve that injury and prolong Guardiola’s career, Cugat then treated him with a new technique when his patient moved to the Middle East.

“I operated when he was playing in Qatar with an ankle injury with the ligaments ruptured,” Cugat said. “My first ankle treated with growth factors was Guardiola. He called me from the locker room and said it was destroyed.

“I arrived three or four days later and said to him: ‘I think the best is surgery as the ligaments had gone’. He didn’t want to. I said we had growth factors. I didn’t explain it but he said: ‘Yes, yes, yes’. We injected, put the bandage on and it was about three weeks. Then I started using on the knee but the first was the ankle on Pep Guardiola.”

Cugat’s career has been dedicated to making athletes heal quicker. Spending an hour in his company, just before lockdown for the coronavirus pandemic, sees his passion come through and he has strong views on the reason behind increased anterior-cruciate ligament (ACL) cases, the injury that footballers fear most.

The biggest question is why athletes request to see him over other doctors. The “growth factors” technique he developed is now widely used. Players have their blood drawn, separated for their “platelet-rich plasma” (PRP) then injected to the injured area. The difference with Cugat is the number of platelets he uses, which is tailored to the patient, and the removal of white and red cells.

“We worked a lot to get the appropriate growth factors,” he said, before describing the technique to use the blood. “Spinning, centrifuged to divide red and white cells, which are thrown away, then we collect the plasma with the platelets. They are activated with calcium chloride to inject.

“I don’t know if it is the best or the worst but we started with this and it was good. Discovering new cells and new methods is a passion. To be involved in this world is a big, big passion.

“I also had one little advantage. I was a football player. I was in the locker room, I lived with the group from Barcelona. We talked about the injuries.”

Cugat started as a player in Barca’s Academy in 1965 but after years he made a decision to follow medicine. His mentor at the club was physician Jose Garcia Cugat – his namesake but not related – told him he should become a doctor.

“I was a No 7 in the middle and the right,” Cugat said. “When I was 21 I thought I would never be Kubala, Di Stefano or Pele.

“My mentor said I needed to study medicine. I was afraid. If I saw a drop of blood, I would faint. He told me not to worry, to study. Instead of vacations, I went to England and spent two or months at a time in Wigan and worked at Wrightington Hospital, centre for hip surgery with Sir John Charnley. I also stayed in Birmingham and London.”

It was during his time in Boston, Massachusetts, that he specialised on knees. He has since seen the ACL injury evolve. There are now many more cases but players are also healing quicker.

“I’ve seen the youngest at seven years old, ruptured both ACLs,” he said. “He is a small boy. It’s not good to do surgery. I told the parents: ‘Please let him go to school and exercise in the gym and avoid football. Wait’. At nine or 10 we can do surgery.

“The external factors for more ACLs are the boots. By mechanics they block and grip and it is impossible to rotate. The most normal ACL rupture is this situation of the knee being weight-bearing and then flex and rotation.

“If the grass is too high it blocks more. It is better for short grass. Also there is a difference between artificial and natural grass. We have seen it is most common when the grass is artificial. They pay £1000million and can play morning, afternoon and evening without touching it and without spending any more money. But pitches can deteriorate and it increases the possibility of rupture.

Players are now healing quicker thanks to more precise diagnosis and better scanning, while clubs have the best physios in the world. And, of course, Cugat’s own methods show how medicine can advance.

He is called the Messi of medicine and it is no surprise that his favourite player is Lionel Messi, although he has not needed to treat the Barcelona star.

“The best is Messi,” he said. “The quality has increased as they need fitness and mentality now, but Messi I have seen all of his years and he has been amazing.

“He is very strong. I know him and have seen him but normally I never treated him. We control the muscle injury when Pep was his manager here. But normally he doesn’t have injuries.”

His body of work spans over half a century and means he views football differently to when he was a player. In fact, he rarely watches the games live at all, given the time he dedicates to work.

“I have two seats at Barcelona but the last time I attended was eight or nine years ago,” he said. “Friends might be over from Japan and want to see the Clasico and they can use them.”

He did manage to head over to Wembley to watch City defeat Aston Villa in the Carabao Cup final, where he met with Guardiola. “I spoke afterwards. I love to see him and they won. Pep likes to win and he was happy as this year Liverpool played well with many many points.”

But there was little time to celebrate. He was flying back to Barcelona the following morning, back to his work as football’s miracle worker.